The Kooks - Down EP 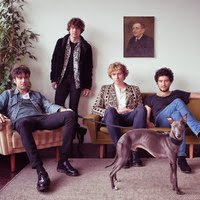 The Kooks’ new single “Down” is sort of a funky little tune - they've taken a different approach, with a staccato beat and a chorus that's like a call-and-response sea chanty. It's an attention-getter, which makes it a good choice as an advance track for their upcoming album, and to anchor this four-song EP.

The other three songs on the Down EP (“Hooray For Henry,” “Hold On,” and “Melody Maker”) are exclusive to the EP, and they each explore a slightly different approach to guitar pop, which is what you come to The Kooks for, after all. To me, the revelation on here is "Hold On" - it's an extremely funky blast of Curtis Mayfield-inspired soul with a racing drum beat, bouyant strings and psychedelic lead guitar. I'm no label scout or even a radio guy, but to borrow a phrase, I think I hear a single.

The Kooks are: Luke Pritchard - vocals and guitar, guitarist Hugh Harris, bassist Pete Denton and drummer Alexis Nunez. More about the upcoming album, Listen, and tour information at their website.