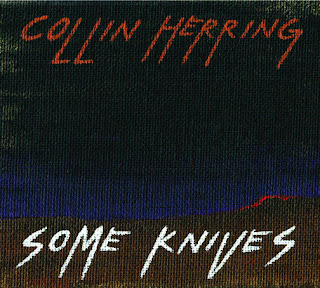 There are a lot of Texas singer/songwriters, and some of them are pretty good. Then there are some that are sort of transcendent. Guys like Willie Nelson, Jimmie Dale Gilmore, Joe Ely - and currently guys like Will Johnson and Rhett Miller. You get Texas in their sound, sure. Some well-placed pedal steel, a twang or cry in the voice, but there's more - you feel like everybody could get this, no matter where they live. I feel that way about Collin Herring now. His sound is distinctive: in his vocals I'm reminded of favorites like Steve Earle, Joseph Arthur, Ryan Adams, maybe Jeff Tweedy a little bit, and the playing calls to mind the lonesome guitar-centric country rock of Centro-matic and Jason Molina's Magnolia Electric Company.

That's Centro-matic's Matt Pence on drums and producing. That's Collin's dad, Ben Roi Herring on pedal steel. Herring plays the guitars and they brought in Jeremy Hull on bass. Herring, on their approach: "I like that the credits on this album are short. I like small groups. There was no 'that sounded good' and then re-recording it at a later date. We all just played our parts."

Herring has a way with a casual phrase, making his lyrics sound immediate, not labored-over - even though it's widely known what hard work good songwriting is, you get the sense that Herring is just throwing these things out there, because he's just that good. You know who else I used to feel that way about? Jackson Browne. And Herring reminds me of him, too.

Gosh, I hope I haven't oversold it. This album is terrific and it would be a shame if I overburdened the young man with expectations borne of my enthusiastic praise. Go check it out. Some Knives is out now (May 13).