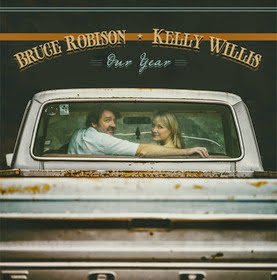 Our Year, by Texas husband/wife singer songwriters Bruce Robison and Kelly Willis, will be one of the best country records you'll hear this year. They're both strong songwriters and distinctive singers who have years of experience bringing their music to life individually. In the last couple of years, they decided to combine their talents and the results have been wonderful. Their first one together was Cheater's Game (WYMA review here). As on that one, the band on this record is just perfect, with tasteful, sort of understated Texas country rock - and without that, the record would not be as good. But it's Robison's and Willis' singing, specifically the way their individual talents play with and off of one another, that make Our Year as special as it is.

The lead track is "Leaving Louisiana", and it's played fairly upbeat on mostly acoustic instrumentation, with mandolin and a plaintive dobro backing Robison's affecting vocals telling a story about disappointment, family relationships and moving on. "Motor City Man" is one of the covers, and Willis takes the lead, one of several times on this record they change a song just by singing it in a different voice - obviously, she's not a "Man" but also, obviously, she can inhabit the experience of "working night or day", and living on the road - "everybody needs a car in the USA" - in this loving tribute to another Texas original, Walter Hyatt:

On "Carousel", Bruce's vocal, underlaid with a sad, sad pedal steel, is the kind of stuff great country tunes are made of. Kelly's harmony vocal is, of course, perfect here. It's followed by a Willis-led weeper "Lonely For You", with a sort of Buddy Holly drumbeat and Bruce's backup vocal under her terrific, emotionally evocative singing. And her lead on "Harper Valley PTA" breathes new life into that one - a shot of humor by way of a song that's simultaneously dated and timeless, with its references to "a Peyton Place" harking back to a different time, but "Harper Valley hypocrites" ringing as true as ever.

Here they are, playing that one:

The album contains three originals (co-writes with Darden Smith, Monte Warden and Paul Kennedy), as well as some well-done, if non-obvious, covers. The title track, “This Will Be Our Year,” dates back to The Zombies in Abbey Road Studios circa 1968. Its hopeful tone is as perfect here as it was in the original version on psychedelic song cycle Odessey and Oracle (or on an episode of Mad Men earlier this year), though presented very differently.

Our Year is full of standouts... also notable is their take on T-Bone Burnett's "Shake Yourself Loose", where they share/alternate lead vocals beautifully. I think it's a mark of their strength as songwriters, and their skill as performers, that the covers and originals flow together magnificently. And, I swear, you can hear them smiling. This is their second duets album - out this week (May 27) on Thirty Tigers. Now, they still have extremely successful solo careers going, so there is no telling when or even whether there will be a third installment in this series. So be sure to enjoy this one and see them if you have a chance this summer: