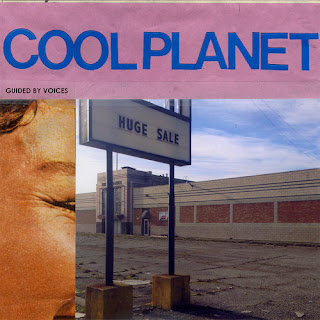 When you've given up being surprised that the artist formerly and currently (but for a while in the middle there, not) known as Guided by Voices (with the reunited, 2010-to-present "Classic Lineup") has released another stellar album of crackling guitar rock, you, like me, will just sit down, listen and try to evaluate it on its own terms. But, hey, Cool Planet is their second FULL album in the first five months of 2014 and their sixth since the reunited lineup started issuing new material in 2012. So surprise is a proper reaction, to be certain. As is joy, once you get into the album a little bit.

Lead track "Authoritarian Zoo" is a Who-style rocker, drums flailing and guitars blazing, to kick things off with a shot of adrenaline. "Fast Crawl" is a sludgy rocker clocking in at 1:42 that does a nice job of transitioning from the former to Tobin Sprout's fantastic "Psychotic Crush" - with a guitar line straight out of Ziggy Stardust-era Bowie and a reverb-heavy Sprout vocal, it's as glam a track as GbV have done. So, the perfect antidote is a sweet acoustic Pollard ballad, "Costume Makes the Man", which features a nice lazy guitar line over the outro.

There are little touches throughout Cool Planet, the kinds of things that diehard GbV fans have come to almost take for granted. However, I don't know a GbV fan who dares take this bounty for granted. We are, to a man, properly grateful... which is not to say we don't expect four to six albums a year. We do. It's just that we're grateful for them, too.

And here's "Bad Love is Easy To Do" - a repeated, insistent guitar line under an understated vocal that bursts into a full rock track - the drumming is especially tasty on this one:

Cool Planet is out now on GBV, Inc. in the US and Fire Records in the UK. As with the last five albums, it's got a great mix of Pollard and Sprout tunes, high quality playing and plenty of energy. In other words, it meets the high standard set by Classic Lineup GbV and augurs well for the planned live dates for summer 2014. More about the album, upcoming dates and other projects at the band's sites below.