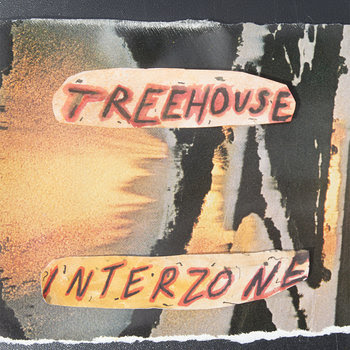 Hey, listen up.  I know that many of you are seeking summer tunes with sunny melodies and unchallenging themes (OK, for some of you hooking up may be a challenge, but we'll let that slide for the moment).  Yes, I've been looking for that stuff, too.  But while I was so engaged my inbox was invaded by Interzone, a really good rock album from a Hobart, Tasmania band named Treehouse.  The sound is part punk, but with a resonant post-punk, grunge and alt rock guitar sound that blurs the boundaries of punk.  In fact, one of the best things about this lovely nugget is the sound of the guitars.  High in the mix and played with purpose, they wash over the listener like waves at the beach (see, maybe it is a summer album after all).  And the structure provided by the bass and drums is solid as granite.  This is as tight a trio as you are going to hear.

Some of the tracks on Interzone are laid back, albeit with a palpable sense of restrained energy.  In the other tracks there is no restraint, just unbridled rock.  Two of my favorites are below.  I suggest playing them loud.  No, louder.  That's better ...

Treehouse is Cal, Jon and Will.  They originally released Interzone as a self-made, self-released cassette.  However, Melbourne label Vacant Valley has stepped up and has released the album in vinyl format, with an accompanying digital download code.  The digital download includes some bonuses, including several live tracks.  You can stream the entire album at the Bandcamp link below, and acquire the goods at Vacant Valley's Big Cartel page.