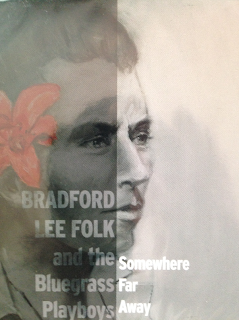 Bradford Lee Folk is a bluegrass singer and guitarist who's based in Nashville, though he's originally from Louisiana and raised in Missouri. Folk lives outside of town and farms during the day, then comes into town to play at night. He says he grew up listening to country, blues and old time string bands, but when he was in high school he encountered the high lonesome sound of bluegrass via a Flatt & Scruggs cassette, and since then he's been devoted to that sound.

He's terrific - as a vocalist, he's nearly the equal of Del McCoury. But I swear I also hear a little bit of Dwight Yoakam twang in there, too. And his band of pickers are in that same echelon. Check out album track "Foolish Game of Love" - it's just about a perfect bluegrass tune:

And here's one about his Nashville neighborhood, "Trains Don't Lie" - just beautiful:

Here's the video of them playing "Wood Swan" at Pickathon in Portland:

And here's "Never Looking Back" from a set played at Music City Roots:

Folk’s worked on a dairy farm, led a touring bluegrass act named Open Road that finally succumbed to the strains of business expectations and the touring lifestyle, and has run his own honky-tonk in Colorado, so there isn't going to be much to intimidate him. It also lends his music an engaging strain of world-weariness and hard-won wisdom that's pretty rare.

The music is bluegrass primarily, with other influences (country rock or Americana, in places). But it's not the least bit watered down, faux or derivative. Brad Folk and his band - Robert Trapp on banjo, Christian Sedelmyer on fiddle, David Goldenberg on mandolin and John Fabke on bass - play with skill, yet at the same time with the kind of abandon that makes one take notice. As you know, we'll feature anything we like on WYMA - and I'm happy to throw some bluegrass on here. If you are a fan of McCoury, Tim O'Brien (who we featured recently) or the great old stuff like Flatt & Scruggs, Ralph Stanley and Bill Monroe, this album will not disappoint you.