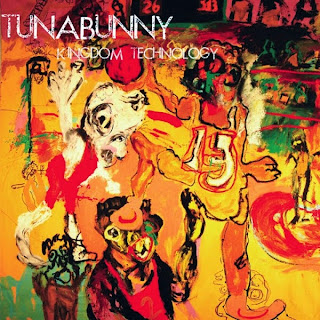 It's a very good record, and it's all over the place... there's dance-rock, guitar-based postpunk, intensely focused krautrock, and throughout, in selected spots, the soaring vocal harmonies that first attracted most folks to their previous records. I get the sense that Tunabunny (Brigette Herron & Mary Jane Hassell) doesn't particularly care what you call their music, as long as you listen and recommend it to your friends. Which is what I'm about to do.

First song is "Airless Spaces", which calls to mind the Deal sisters fronting Kraftwerk, or something like that. That segues directly into "Canaries in Mine Shafts", which is pop-punk perfection along the lines of Breeders, GbV - opening with guitar feedback, and featuring squalls of guitar and vocal noise - a lot in less than 2:00. "Save It Up" is one of the dance numbers, featuring heavy bass, breathy vocals, synths and what sound like handclaps but are probably just snare cracks.

This is the advance track, and though it's not the catchiest one, it's very representative of their approach on this album. The catchiest track, to me, would be "Coming For You", unless it's "Empire", which anybody reading this who is a GbV/Breeders fan should go download immediately.

Here's "Power Breaks", a bit along the lines of "Save It Up", kind of a dance number based on a motorik beat, building out of some electronic blips that sound completely random at the beginning and somehow coalesce:

"Pump on the breaks now", they say, and somehow it makes perfect sense. Not brakes. Breaks and beats.

Somehow, they pull all this together into an album that flows pretty well, and the sequencing sustains interest from song to song, until the final track, "They Say This Is Where Our Dreams Live". While longer than the two more ambient numbers, it's intense and guitar-based from the beginning - at times featuring nothing but a ragged electric guitar line and vocals, and the vocals are beguiling... and then it changes, the second half serving as a narrative. Like the rest of this album, it's strange, beguiling and holds your interest all the way through - if for no other reason than to answer the question: "how are they gonna end THIS one?"

The album is out now (released late April) on HHBTM Records.