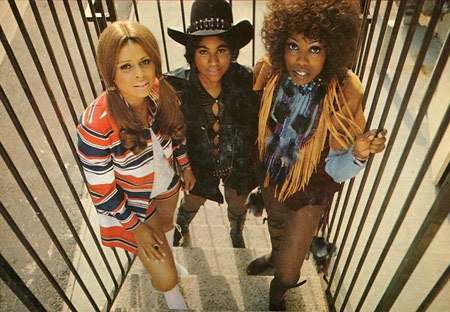 Every once in awhile, we stumble on a soul song we missed in 2012-13 on the Soul Corner. And listening to the "Little Steven's Garage" Sirius satellite radio station this week, we heard a great one we never presented. And what better time to bring it out than this holiday weekend?

"One Monkey Don't Stop No Show" is a song title that has a couple songs attached to it, starting with one by Stick McGhee in 1950, later redone by Big Maybelle, Joe Tex, The Animals, and others, and more recently completely reinterpreted by Gillian Welch ("One Monkey" on Soul Journey) .

But we're leading with The Honey Cone's 1972 version, recorded for Hot Wax Records, started by Holland-Dozier-Holland in Los Angeles when they left Motown. The Honey Cone were an all girl trio, led by Edna Wright, younger sister of Darlene Love.

Not surprisingly, it has a strong Motown feel, and was popular in the UK during the Northern Soul era. It bears little if any resemblance to earlier versions of "One Monkey Don't Stop No Show".

And since so many of our readers are Gillian Welch fans (and really, who isn't?), let's toss that in too for good measure, leaving with you a trifecta this Friday:

WYMA hopes to start a trend of dropping the phrase "one monkey don't stop no show" into conversation whenever possible. So the next time one piece of your presentation at work doesn't come together, or one person can't make your dinner party, or you hear your spouse complain that they they can't find a piece of their intended outfit, you now know exactly what to say. As they might put it here in Portland, "No worries bro. One monkey don't stop no show."

Plus, don't miss our regularly scheduled Rolling Stones Friday bearing an all too obvious link to today's Soul Corner.
Posted by Jim Desmond at 5/23/2014

It's a great Friday - a Soul Corner and RS monkey twofer. You could do half a year of monkey posts. Smokey Robinson, Beatles, Elton John, Leon Russel. The closing post in the series would be Chuck Berry's "Too Much Monkey Business."

Wow, I've loved the Gillian Welch version for years. I never knew it was a cover.
And if you want songs about monkeys, I can probably dig out a few dozen.