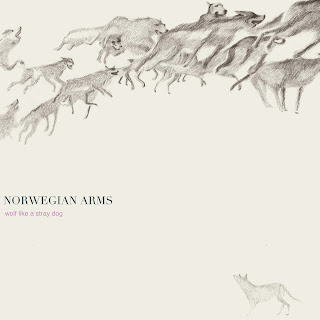 Norwegian Arms is a Philly-based duo (Brendan Mulvihill, Eric Slick) playing some intriguing, exotic folk rock along the lines of Vampire Weekend, Walkmen and Arcade Fire (to my ears, anyway). This debut album, Wolf Like A Stray Dog, is the result of lyrical and musical reflections on a year spent in Siberia by vocalist/mandolin Mulvihill, shaped into an album upon his return to the states with Slick (who is also a member of Dr. Dog.), in Dr. Dog's studio in Philadelphia.

The album integrates Eastern influences in a slightly different way than the afro-pop of Vampire Weekend, but it's not dissimilar, which raises all kinds of questions about the commonality of rhythms and musical approaches the world over...

The record is intriguing and pretty charming - and you have every incentive to check it out, since you can stream (and currently download for name-your-price) at Bandcamp:

It's on Big School Records and you can pre-order vinyl, physical cd's and other merchandise at this link.

Physical release is due on Jan. 15.