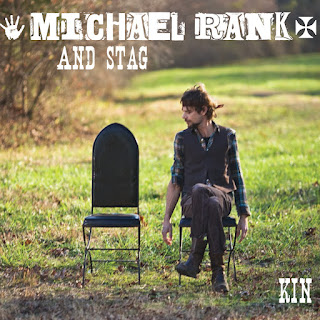 File under better late than never. This CD was released last February but I only recently discovered it when it started popping up on Best of 2012 lists. Not a surprise that I would like it as I was a huge fan of Michael Rank's notorious Snatches of Pink who ruled the roost in Chapel Hill NC when I moved there in 1988. In fact, Snatches of Pink were one of the very first bands I ever wrote about way back when I first started writing for a weekly there. They continued to play and make records intermittently from then on until recently.

Kin, while Rank's first solo record, isn't a radical departure from Snatches of Pink, unless you consider "Country Honk" or "Dead Flowers" a huge detour for the Stones. Rank has a great feel for the swagger and grease of the best rock'n'roll and it's all here.


This is my favorite from the record, "On the Bleed":

Stag is an all star cast of Tar Heels musicians - including two of my favorite drummers John Howie Jr. (Two Dollar Pistols) and Sara Romweber (Flat Duo Jets).  And as with anything Rank has ever done, there is a lot of guitar and drums here, but also fiddle and lap steel and some real nice country rock vibe.

The emotional vibe is not nice. The songs bleed with bitterness over the end of a relationship, again the stuff of great country rock. There is an immediacy to the writing and playing here that serves the songs well - it just spills out on the floor and grabs you by the collar demanding that you listen.


Really good stuff. If you don't know of Michael Rank, but are a fan of Keith Richards or WYMA favorites Kurt Vile or The War on Drugs, you'll like it.