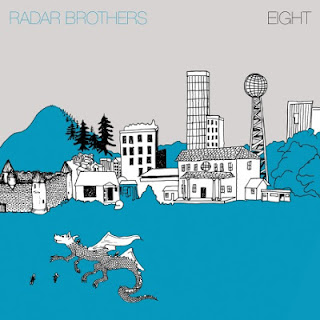 The Radar Brothers' latest album, Eight, starts out quietly enough, with an almost whispered baritone vocal... but it doesn't take long for the guitars to kick in. And they really never let up, throughout the 43:00 plus of the record. There is an interesting juxtaposition of the amped-up guitars and the laid-back vocals throughout the record, and as noted, the trend begins on the first track, "What If We Were Banished"...

It's a little reminiscent of Mark Eitzel or The National, but I think it rocks harder than those, and certainly gets more psychedelic. In fact, there are times on this record (parts of "Couch", "Disappearer") that remind me of Pink Floyd. "Ebony Bow" is gorgeous - the guitars, piano and overlaid vocals all combine to give the sense of drifting along, not being in a hurry, and enjoying the journey.

It's a very interesting record - all the songs are around 4 minutes long, all are mostly midtempo, and the vocals are, for the most part, pretty sleepy... except for the 3:08 "Time Rolling By", which has got some serious giddyup, both in tempo and the volume on the guitars. And the song is more than half over before the vocals kick in. It's a good change of pace, and a very good rock song.

If what you're looking for is a record that combines well-played rock and alt/country with great guitars and occasional psychedelic flights, you will want to spend some time with this record.