REVIEW: Dorado - Anger, Hunger, Love, and the Fear of Death 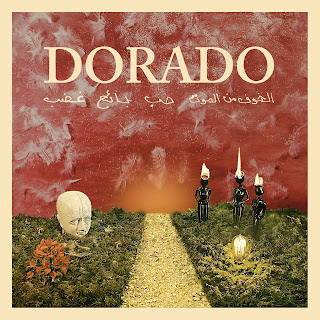 There has been a lot of good music coming out of the deep south in the past few years.  Really good music -- adventuresome, varied, and unapologetically distinctive; taking the best elements of southern rock and roll and fusing them with other good ideas to create a new southern rock and roll.  One of the good examples of that music was Alamalibu, by Birmingham's Through the Sparks (our review here).  The frontman of that band, Jody Nelson, has just staked his claim as a forerunner of the new southern rock with his Dorado project.  And the claim takes the form of Anger, Hunger, Love, and the Fear of Death, just released on the This Is American Music label.

This album seems to have its own mind, and the musicians are along for the ride, and to play their part in the grand play.  There is no slavish devotion to any genre, and in some cases the songs themselves shapeshift along the way.  The sense is a collective of stories that are psychedelic and southern Gothic in spirit, if not always in form, and delivered over music that is part art rock, part southern rock and part indie pop.  Perhaps it is best summed up as Nelson & Friends' Magical Mystery Tour, but that would invoke some copyright issues.

To make the album, Nelson called upon his Through the Sparks mates and other collaborators.  The full list of musicians is Jody Nelson, Shawn Avery, Greg Slamen, James Brangle, Jason Taylor, Helen Gassenheimer, Gary Wheat, Thomas Mimikakis.  The album was recorded at the Alamalibu studio in Birmingham.

Apparently Nelson has described his creative process as making a mess, and then cleaning up the mess.  As you can hear with "Where's My Girl", Jody's messes clean up well.

"Ape of Dorado" might have been a Syd Barrett song, if Syd had been a southern boy --

The album, and our review, closes with the lovely folk pop of "Birds of Paradise" --

Atlanta label This is American Music seems to have become a critical hub of the new southern rock scene, so it is fitting that Anger, Hunger, Love, and the Fear of Death is its first release of 2013.