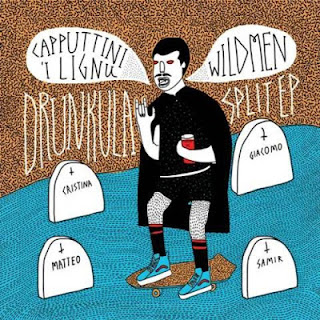 Italian garage rock outfit Wildmen will be releasing their first album on March 1, and you are gonna want it... as long as the rest of it is as awesome as "Drunkula", a single they released recently in combination with Capputtini 'I Lignu :

And here's a new video for another advance track, "Haters Gonna Hate":

Hell, I like the titles almost as much as the music... but I really like the music.

From our friends at Shit Music For Shit People (who released one of my favorite records of 2012 - actually #8 - Strange Hands' Dead Flowers). They're actually really nice folks and they think a lot of you, especially if you buy their great music. But would you pay as much attention to a label called "Nice Music For Nice People"? No, I didn't think so.

Italian garage band? Seriously, what could be better than this? Next thing you're going to tell me that beer is free at their shows.