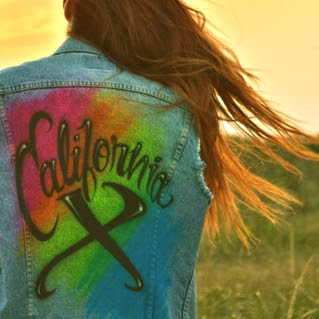 Here it is the third week of January -- in fact, I started listening to this album about a week after I posted my 2012 best-of list -- and I'm ready to say that if another album comes this year that hijacks my crappy stereo like this one, well, that'll mean it's been one hell of a good music year.

California X is a loud band from Amherst, Massachusetts, fronted by a singer/guitarist named Lemmy Gurtowski, and with a bass player named Dan, and a drummer called Cool. The web is aglow with praise for this terrific album, which was released by New Jersey's excellent Don Giovanni Records (Brick Mower, Screaming Females), but there's a prevailing groupthink emerging tying this band's sound uncomfortably closely to Dinosaur Jr. I think it's a facile comparison. They start with, "Hey, they're both from the same town!" as if the only music young Lemmy was exposed to while growing up was what he heard at Saturday night hootenannies down in the stock room of Mr. Drucker's dry goods store. Then there's "Well, Lemmy G. and J. Mascis both know where that gain knob is located on their respective amplifiers." This is a salient point.

And make no mistake, Dinosaur Jr. is a great band, but they're a great band that doesn't sound all that much like California X. Not to belabor the point, but for example, I always got the feeling that the only reason J. Mascis sang at all was to relieve boredom he would experience between solos. Instead of mumbling slackerisms, Lemmy's singing is emotive -- at times yearning, at times almost euphoric. And for what it's worth, Dinosaur Jr. never put a Voltaire quote at the end of a video:

As you can tell if you hit play above, these songs are basically well-wrought, fuzzed out power anthems. Certain parts of certain songs make me think of Japandroids, and No Age, and even a metal act like Red Fang. The guitars in "Mummy" remind me of mid-90s Superchunk (the song is the 2d track of this embed):

My favorite of these eight strong tracks is "Lemmy's World", the chorus of which is an unmistakable homage to one of the all-time great power anthems, the Foo Fighters' "Everlong". I wish a version of this song were available to post, because I promise you if you heard it, you'd own this album shortly thereafter. Although I probably say this too often, don't make the mistake of conflating identifiable influences with lack of originality. Joseph Conrad did not just finish reading Judy Blume, get a cup of coffee, pick up a pen, and write Lord Jim.

Check out California X at Bandcamp and Tumblr and Facebook.

Visit all the great bands at Don Giovanni Records.