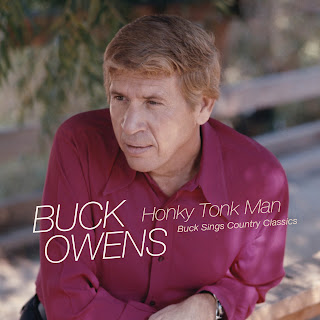 Even if you've listened to everything in Buck Owens' catalog, you haven't heard these songs yet. That's because they were recently assembled from archival tracks recorded for broadcast on Hee Haw.

Honky-Tonk Man consists of backing tracks the Buckaroos recorded for the television show, with the original tracking vocals that Buck recorded, and the skillful engineers involved in this project put it all together to make one of the best country reissues I've ever heard - even if, again, it's not "technically" a reissue!

The tempo varies, but is mostly upbeat - there are fiddles and even, on a few of the cuts, banjos, but one of the highlights for me are the guitars and Buck's vocal on "I Washed My Hands In Muddy Water" - just a terrific performance. One of the slower-paced tracks is a cover of Jimmie Rodgers' "He's In The Jailhouse Now" - a pretty faithful reading, but of course with the Buckaroos' stamp on it. And there's a Tex-Mex lilt to Charley Pride's "Is Anybody Going to San Antone?", the requisite swing to Bob Wills' "Stay A Little Longer", and a real boogie to "The Bridge Washed Out" that show these guys could play it any way you want it. Here he is, singing with his son on Hee-Haw - this is the title track:

Buck's singing was, as always, terrific, the playing was uniformly excellent, and the recording is clean. This is an unbelievable treat for anybody who likes the Bakersfield sound, Buck Owens, or country music in general. It's out this week on Omnivore Recordings.

What an album cover.