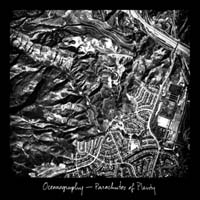 Oceanography is Oakland's Brian Kelly - he's playing rock music that's exhilarating: simultaneously earthy and soaring. His voice is strong and they lay down a heavy bass and drum rhythm under the guitars and keyboards. They're not reinventing rock, and it's not real complicated stuff... they're just playing it really well. Kelly's the main driver here, but he has help from a cast of players including drummer Kathleen Richards and organist (and engineer) Scott Barwick.

From "American Cars", which starts out with a squall of guitar feedback, to "Drinking Water", which builds a little more slowly, they've put together a wall of sound that should appeal to folks who like good guitar rock.

The EP came out in December, and the band has made this single available for free download:

Video for "Napoleon Holiday" - this one has a little more majestic pace to it:

This is really good stuff - these five songs definitely create some expectations.