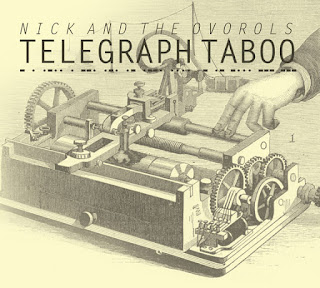 Nick and the Ovorols is Nick Peraino (vocals, guitar), Carlos Showers (guitar), Vic Jackson (bass) and Lance Lewis (drums) and they are a smoking hot blues-rock band. On parts of Telegraph Taboo, I am fondly reminded of ZZ Top's Deguello - one of my favorite blues albums. And Peraino's very strong, expressive voice is a bit reminiscent of Warren Haynes'. In fact, if you're a fan of the blues-influenced rock of bands like Govt Mule and Haynes' latter-day work with the Allmans, you will do well to give this a try.

From the upbeat stuff like "Take the V Train" and "Chitown Via Greyhound" to the beautifully-played slow instrumental "Soundtrack to Life" with its twin guitar meanderings, the electric guitars (stinging lead or slide, or both) are at the center of the show... although the rhythm section of Jackson and Lewis have no trouble keeping up and even, on songs like "Honey Please", leading the way.

Nick's band is well-known in Chicago where they have been in residence at Kingston Mines and have shared the stage with folks like Buddy Guy, Sugar Blue and Taj Mahal. This is the first studio release from this band.

Here's a video of them performing the Tempts' "Shakey Ground" last year at House of Blues in Chicago:

(The Temptations original featured Eddie Hazel on lead guitar, so I give Nick extra points for great taste in guitar players.)