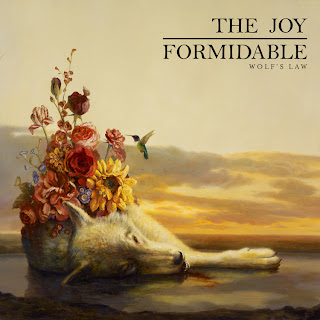 The Joy Formidable have been featured on our blog before - Scott first came across them and featured their music on a Midnight World Pop Scout, and I posted a review of their terrific 2011 album The Big Roar. Their follow up, Wolf's Law, is due out next Tuesday (Jan. 22) on Atlantic. The high standard set by The Big Roar is met and possibly exceeded on this one.

The Joy Formidable still rock extremely hard - I'd call this a drum-based sound and in some ways they remind me of the Foo Fighters. I'm not surprised to learn that since releasing The Big Roar, they toured in support of that band - there's a lot in common. It's exciting music, but very melodic for all that. There's not much change in the sound from that earlier record, nor should there be - The Joy Formidable have nailed a very exciting sound, and if anything have perfected it in the time between then and now. There are a few new sounds - check out the Jack White-style guitar work on "Little Blimp". And the pace gets pretty breakneck, showing perhaps a bit of a punk influence, on "Bats".

Here's the video for lead cut "This Ladder Is Ours":

Here is the video for "Cholla":

There are a few ballads ("Silent Treatment", "The Turnaround"), but even on those, the sound is big and anthemic, with liberal use of swelling string sounds to supplement Bryan's strong vocals... if nothing else, she get a chance to show her range. Just in case anybody thought she would not be able to carry songs without all that rock accompaniment - she has no problem with the slower stuff. "The Turnaround" is beautifully sung. It's just that big rock is what The Joy Formidable do best. And when they are at their best, much like the Foo Fighters, they make you reach for the volume knob and turn it up.