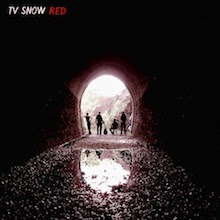 TV Snow is an Australian rock band playing a very catchy variety of guitar rock. On their debut album Red, they demonstrate a real understanding of and facility with both indie rock and pop styles. They remind me in places (opening cut, "Call to the Siren" and "Boy Wonder" for example) of American South power pop bands like the dB's and the Connells. In fact, at times they very much remind me of the Connells - it's sort of eerie. Other songs have a little bit more punk attitude - "Animal" is a nice example of this with its jagged guitar line and disaffected vocals. But overall, this is very well-produced, very catchy stuff - the choruses in these songs really take off and soar.

Here is the exuberant "Downtown":

TV Snow consists of Sean Tyler on vocals and synth, Anthony Di Giovanni on lead guitar, John Mariani on rhythm guitar, Derek Wardrobe on bass and Garo Tanzi on drums. Sadly, the original bassist, Ben Linden (nicknamed "Red" and after whom this record is named) lost his life in a shark attack shortly after this album was recorded. I think they're to be saluted for carrying on - it's clear this band has a pretty bright future.

They could probably go in a couple of different directions... pure pop is certainly an option, as they really have a way with a chorus and don't mind loading in the synths - witness the ballad "I Will Dance". But I hope they retain the punk edge - to me, that makes them much more interesting than just a pop band. The transitions from one to the other are especially evident on "Plastic Painting" - lush vocal chorus into jagged guitar line, with a punk backbeat behind the whole thing.

Here's a snippet of their music in a video of them tracking some drums:

The record is currently available on iTunes, and due for wider release in 2013.