REVIEW: Dolly Varden - For A While

Why are Midwesterners so earnest? Could it be that the lack of mountains or ocean together with brutal winters and hot, humid summers bring a dose of humility? Or perhaps the landscape triggers a need to adopt an approach to life that is forgiving and generous in spirit?

I honestly don't know, but somehow a band as grounded and earnest as Dolly Varden could only hail from the Midwest, in their case, the capital of the Midwest, Chicago.

Dolly Varden, led by husband and wife Steve Dawson and Diane Christiansen, has been making music since the early '90's, received great press, developed a devoted following, but never achieved the success that might have awaited this 5 piece band. And on their new release, For A While, it's clear that they accept that and are secure in who they are and what they do. And what they do is write and perform unusually well structured and thoughtful songs, moving comfortably from folk to alt-country to jangle pop ("Walking the Chalkline Again") to rock ("Done (Done)"), all exceptionally well done and with a distinct Midwestern wholesomeness that is completely at odds with the cynical and insincere age in which we live. 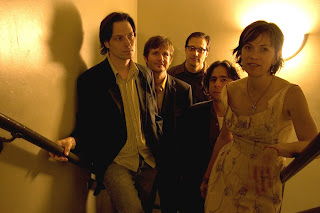 Which isn't to suggest the songs are light or always particularly upbeat.  For A While is quite often stark and keenly observational, looking at people and situations as they are. The opening track, "Del Mar, 1976", is a conversational recall of growing up, with good memories of sliding down hills, and seeing Buck Owens perform at the fairgrounds, but also the singer's depressed Mom upstairs crying in bed, and an alcoholic lady next door ignoring her poorly behaved twin children. But Dawson's voice is a naturally warm and soulful one, which makes these reminisces come off sympathetic without any trace of regret or bitterness.

On "From Saskatchewan to Chicago," Dawson traces the migration of the men in his family, starting with his great grandfather heading out for California, through the current day to Dawson in Chicago. I am reminded of the Silos and another great Midwestern roots rock band, The Vulgar Boatmen, in Dawson's plainspoken telling of the journey, its ups ("fishing all summer in the river behind our house, I was singing to the trees, singing to the water") and downs:

My grandpa took a job as a teacher in New Mexico
It was the height of the Depression
Thee was nowhere else to go.

Christiansen takes the lead vocals on the title track:

I particularly like "Temperamental Complement" a more experimental rock-oriented track, and the beautiful folk song "Mayfly" (snippets of which are highlighted in the interview linked in the following paragraph). Dolly Varden has had the same lineup since 1995 and their comfort and trust in each other is evident. Guitarist Mark Balletto seems to add just the right lead or pedal steel fill at just the right time. The record benefits greatly from being recording essentially live in the studio, the making of it discussed here:

True to their sincere Midwestern roots, Dolly Varden close the record with a song called
"Thank You", a spirited romp that without saying so exactly just screams with the joy of the band playing together and for us.


For A While is a very warm, engaging record. You should buy a copy. Visit the Dolly Varden web page where you can read a write-up by Dawson on each song, and buy cd's and vinyl.
Posted by Jim Desmond at 1/28/2013

Thanks for the review of my fave Chicago band. I must agree about Temperamental Complement, which I never listen to just once, but you know I'm a sucker for Diane's cool vocals. (Nobody never meant "la la la" better before.)I'll never understand how the world doesn't know about DV.

The City Winery show was great, but I realized, as I sat there with so many long time friends from various stages of your life, how much we miss you back here in the flatlands.

Looking forward to the next time...

Not as much as I miss everyone...
thanks for reading.