Swamp Dogg is off the Leash - Again. 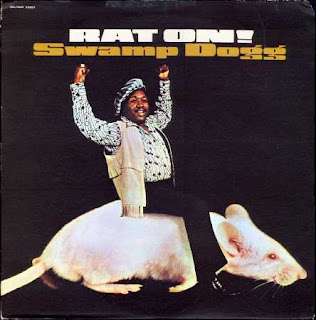 Not all reissues suck.  Some are great.  Two reissues from soul iconoclast and Nixon enemies' list member Swamp Dogg (aka Jerry Williams) will be released by Alive Natural Sound Records. They are reissuing  Swamp Dogg's newly remastered first two records from the early '70s: Total Destruction To Your Mind and Rat On! on March 5th. This music will be available on black vinyl or CD.  Swamp Dogg is offering fans free downloads of "If I DieTomorrow" (from Total Destruction To Your Mind) and "Creeping Away" (from Rat On!).

Swamp Dogg wears many hats - performer, songwriter, arranger, anti-war activist and producer.  His own words help us understand why record companies had difficulty embracing the man: “Commencing in 1970, I sung about sex, n*ggers, love, rednecks, war, peace, dead flies, home wreckers, Sly Stone, my daughters, politics, revolution and blood transfusions (just to name a few), and never got out of character. He did not get put of character when he created what has been described as one of the 10 worst album covers of all time: 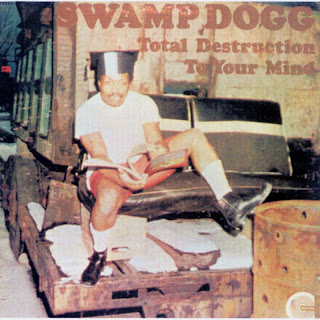 So as another original,  Lord Buckley, so eloquently stated:  "Hipsters, flipsters and finger-poppin' daddies knock me your lobes."  The first taste is free. His music is rock, it's country soul, it's classic R&B and it's funk.  Take away the impeccable Stax horn arrangements and it's stone cold classic country.  Enjoy.  Rat on brother, Rat on.

The following sounds as if it were written for Otis Redding, George Jones or Charlie Rich. Swamp Dogg is Everyman.
Posted by Frank Fahey at 1/29/2013