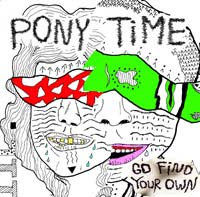 Seattle duo Pony Time plays fast and loud - an intriguing cross between the Stooges-inspired garage rock of JEFF the Brotherhood, the primitive surf guitar of Dick Dale, the constant hard beat of Bo Diddley and bare-bones rockabilly. And if that sounds intriguing, by God, it is supposed to.

Pony Time is Luke Beetham on bass, guitar and vocals and Stacy Peck on drums. This is a terrific album, all sneering vocals, fuzzy guitar and drums that alternate between solid backbeat and wild flights and flourishes, often within the same song. 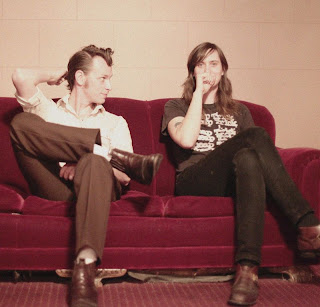 It is crazy stuff - the music is a lot of fun, and the songs (including the titles: "Hippy Shit", "Lesbian Mayor") are infused with a genuine punk sensibility. Whether the guitars start out fuzzy ("Kathleen Hanna") or build to it ("Hex On You"), they get there every time - and it's enchanting.

Here's "What If You Caught Me" - you can download it and decide for yourself. It's a good representation of their sound:

And here's the video for album cut "Geordie":

Go Find Your Own will be out February 19 on Per Se Records.