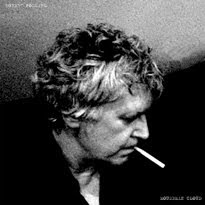 Shall I rave about the perfection of album opener "Obvious #1"? Or the slightly more perfect perfection of closer "Chief Meteorologist"? Or the fun to be had savoring the wordplay in title track "Mouseman Cloud"? I urge you to listen for yourself and just try to pick a favorite. That's part of the fun of a new Pollard album like his current release Mouseman Cloud - trying to pick a favorite. It changes, you see.

"Obvious #1" is a fully realized pop/rock gem with one of the best vocals he's tracked in some time, and it was the track released in advance of the album (we posted it here). But it's nearly surpassed, on repeated listens, by the immediately following "Picnic Drums" - it's got multiple changes and an irresistible chorus to close out the song. "Mouseman Cloud" is another song with the trademark Pollard changes - I count 6 changes and the song is only 1:29! And go figure the lyrics - here's a representative couplet:

"Picture the oyster dip
Squeal for the oxygen drip"

"Dr. Time" is power pop at its best, tension release on the guitar lines, crashing drums racing along and a bombastic vocal in Bob's fake British accent - in a little less than a minute.

There's "Human Zoo", another power pop gem in 0:48, and "Bats Flew Up" which veers into glam territory. You get the idea - it's all here and it's all well done.

Often, reviewers will make note of the volume of Pollard's musical output, and make vapid statements to the effect that he needs an editor or should somehow pare it down. I get it, I do. But, unburdened by the shackles of "impartiality" (as though such a thing were possible in matters of musical taste), I would like to say for the record that the world owes him a debt of gratitude for taking the time to craft great records like this as often as he does. It is a lot to take in, but in my experience even the songs that don't grab me on first listen will come back and smack me later. Just listen to "Smacks of Euphoria" which on first listen sounds a little unfocused and meandering. But listen again, and pay attention to the gorgeous guitar line over the end of the song. And stick around for what is now my favorite song on the album: "Science Magazine" - it's just beautiful, as good a pop/rock song as you'll hear this year... or until he releases his next record, I suppose.