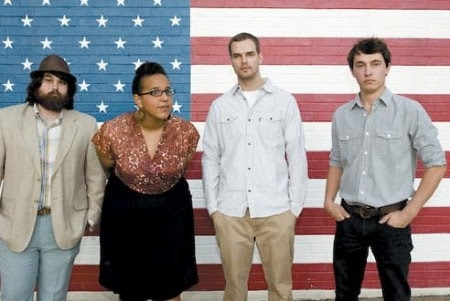 The sudden rise of the Alabama Shakes is quite a story. A year ago the band was working day jobs in Athens, Alabama, playing to crowds of 20-30 people, and self-financing their first recording with no record label or other support.
Fast forward to this week - Boys and Girls was released yesterday by ATO Records following a good old fashioned major label bidding war, the band got an excellent feature story in the Sunday New York Times, has two sold out shows in New York City, an appearance on David Letterman, and then embarks on an almost completely sold out tour that will take them to Canada, Europe, the UK and various US cities.
So why all the buzz? It's not complicated. Brittany Howard has got it. This 23 year old is blessed with a killer voice that naturally combines soul, blues and rock'n'roll. She plays guitar like her life's on the line. Somehow a young woman who was delivering mail a few months ago is now earning comparisons to Janis Joplin and Bettye LaVette. Yes, that is sort of ridiculous, but she's damn good!
In an age of Auto-Tune, ProTools, American Idol, and a maximum of 150 characters, people are starving for something genuine and lasting, and Brittany Howard and The Alabama Shakes are, as a Southern friend of mine likes to say, as real as a heart attack.
And sometimes a new band takes off because of a great song, and for the Alabama Shakes that song is "Hold On", which sounds like nothing else except just what you've been waiting for. It literally leaps out of your iPod or car radio, a young band busting out and just grabbing it, like the White Stripes on "Seven Nation Army" or Pearl Jam's "Jeremy".
Howard sounds like such an old soul, right at the onset of "Hold On" (lead track on the CD) -
Bless my heart
bless my soul
didn't think I'd make it
to 22 years old
There is something completely timeless about Howard's voice, her writing, and the band's playing. It has no self-conscious retro feel, instead coming across completely instinctual and deeply passionate. What I like best about Boys and Girls is its greasy sound and rough edges. This vibe of 'let's just play and not over think this' comes through especially well on "Hold On" but also the album's 3rd song, "Hang Loose", a terrific rock'n'roll song that wouldn't seem out of place in a Bruce Springsteen live set.
The band has far more in common with say the Drive-By Truckers and old Rolling Stones records than any slick neo-soul of today. Boys and Girls hisses, crackles and rocks, while wearing its Southern working class hero heart on its sleeve, as here on "Rise to the Sun" with its garage rock feel:
Brittany Howard and Heath Fogg both play guitar with real feeling without ever overdoing it, while the rhythm section of bassist Zac Cockrell and drummer Steve Jackson play like old pros with a groove that would make them proud just west of Athens Alabama down Hwy 72 in Muscle Shoals. Add the tasty piano and keyboards and all it's all there - the rock and the roll.
They can slow it down too. One of the highlights here is the title track "Boys & Girls" a ballad that recalls the Memphis soul sound and even Bob Dylan's "Every Grain of Sand". Howard's fine writing skills avoid the typical cliches, as demonstrated on this title track, where she laments the loss of a super tight childhood friendship, their platonic relationship sacrificed to the complications and outside pressures of adolescence. A good song topic, real stuff, Howard not looking over anyone's shoulder or dressing up in someone else's clothes.
The band has the confidence and the right instinct to keep things economical, the 11 songs here clocking in at 39 minutes, though still finding room to kick things into a higher gear at the end of cuts like "Be Mine" that have a Southern rock jam band spirit without the guitar cliches. Here's a live video of "Be Mine" from our friends here in Portland at KINK radio:
The entire CD is being streamed here free (for awhile anyway): http://www.npr.org/2012/04/01/148918546/first-listen-alabama-shakes-boys-and-girls
You need to be as true to the feel and the real as the Alabama Shakes themselves and go buy this one at your local independent record store.
And let's not forget that our fearless leader here at WYMA, John Hyland, tipped our readers off to the Alabama Shakes on October 18, 2011, which probably seems like a lifetime ago to the young folks in this band given the deserved but truly crazy turns turns in their world during the past few months.
My advice? Get on this bandwagon now while there is still a little room.
Artist web page: http://www.alabamashakes.com/
Posted by Jim Desmond at 4/11/2012