Anyone who has followed the career of Glasgow's Laz (Lawrence) McCluskey knows he is a master guitar pop craftsman. For both his Bubblegum Lemonade project and our current focus, Strawberry Whiplash, he creates hook-filled melodies embellished by the jangle and fuzz of his guitar. And with Strawberry Whiplash, we get the added treat of Sandra's pitch perfect vocal delivery. Building on their foundation of three singles since 2008, Laz and Sandra have just released their first full length album -- Hits in the Car on Matinée Recordings.

The album comprises 13 tracks, arranged along the concept of the life of a relationship from the original pickup (the 59 seconds of "Do You Crash Here Often") to the final kiss-off (the touching "First Light of Dawn"). While a concept album is an ambitious task, especially for a debut, the duo are fully up to the challenge. Heard as a concept or as single tracks, you will be charmed and entertained. The songs are concise pop nuggets -- only one exceeds three minutes -- and they echo the influences of The Jesus and Mary Chain, The Shop Assistants, The Primitives and Phil Spector produced girl groups. "Picture Perfect" appears when the subject relationship still is on track:


Here is the breezy "Looking Out for Summer". Things still appear to be fine at this point.


One of the lovers appears to be infused with a touch of paranoia in track 7, "What Do They Say About Me?"


"Stop, Look And Listen" falls closer to the disintegration of the relationship, and was featured in our January profile of the group.

And as things slide further towards breakup, Laz and Sandra hit us with this glorious tumult of fuzzy guitars, reminiscent of their Glasgow forebears The Shop Assistants: "It Came To Nothing" --


Hits in the Car is the real deal--no poses or pretenses--just expertly crafted and delivered noise pop that exists for the right reason: They like to perform it and we like to hear it. Fortunately, unlike the relationship at the core of the album, you'll be able to listen to the songs over and over. 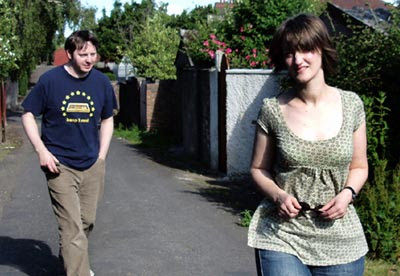 It’s strange to think that Hits in the Car is truly the debut record for Strawberry Whiplash; seems like I’ve been posting their singles or B-Sides for years now. Regardless, this collection of thirteen great pop tunes is pretty spot-on for a debut, going between infectious indie pop and noisy janglings; its all worth every minute of time you invest, and one can only suspect that you’ll get more back the more you put in.