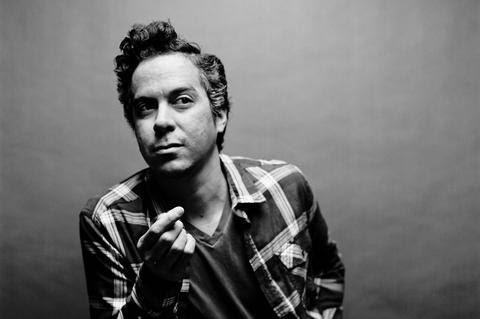 I am drawn to musicians who seem to be "old souls" - tasteful artists with their own unique style inspired by many decades of highly varied sources. They are not retro, hard to pigeonhole, as much of the present and future as the past, timeless. We've written about many old souls here at WYMA, including Levon Helm, Joe Henry, Tom Waits, Lisa Hannigan, and most recently, Brittany Howard of the Alabama Shakes.
M Ward is one of those old souls with his gentle evocative voice, beautiful guitar tone, masterful melody writing. His work incorporates elements of folk, blues, country and rock, and everything in between, plus a healthy dose of the Beatles.

Mr. Ward's brand new and 7th release A Wasteland Companion (Merge Records) doesn't break any radical new ground, but in places is a slightly more polished and poppy effort. And the pure pop is done to great effect, as here on "Primitive Girl", which recalls in its quality some of the great mid-era Elvis Costello radio singles such as "Veronica" and "Every Day I Write the Book":

"Primitive Girl" is not the only piano-based song, with both Ward and Howe Gelb playing piano here.

Here's a terrific animated video and another pop gem, "The First Time I Ran Away":

She and Him fans will enjoy two duets with Zooey Deschanel, "Me and My Shadow" and "Sweetheart", the latter a radically rearranged Daniel Johnston cover.

As always, Ward is perfectly supported by very capable players, tasteful arrangements and spot on production.

If you have somehow missed the boat on M Ward, this is a fine place to start. Ward is a talented artist with a clear sense of what he is trying to do. A Wasteland Companion is great stuff from start to finish.

Artist web page, where you can listen to the CD: http://www.mwardmusic.com/

Agreed JD. Breaking new ground is a formal notion that is kinda beside the point with artists like this. Does anybody do what M. Ward does? Don't think so.

FB, exactly. Well said. Thx for reading and commenting. We strive to be a safe haven for recovering music critics.