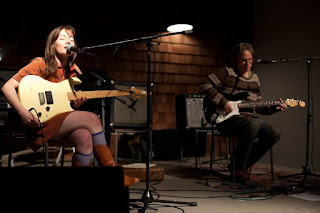 I like the guitars, especially the sort of suspension in "Monochrome Girl"... and the jangle, plus the ethereal female lead vocal on "Rhodesian Man".

You can pre-order a limited edition vinyl (with download included) at their Bandcamp site.

While you're at it, check out their February EP Very Fallen World.

Does that intro to "Rally Point" remind you of anything?

Finally, I will take this opportunity to share with you Mr. Greer's website. He's an excellent writer, which is plenty enough reason to bookmark and read the thing. But he will also occasionally pull out a memory or MP3 from his days as part of Guided by Voices. And you can also follow him on Twitter.
Posted by John Hyland at 4/07/2012