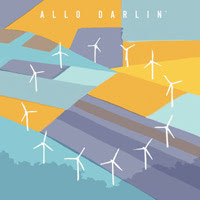 If the world of pop music were fair, Europe, the new sophomore LP from London-based foursome Allo Darlin' will make them famous. Of course, the world of pop music isn't characterized by fairness, so we'll just do our best to tell you why this album should soar. Allo Darlin' produces the intelligent brand of indie pop which is the trademark of bands such as The Lucksmiths, the Go-Betweens, Belle & Sebastian and Camera Obscura. Moreover, frontwoman and songwriter Elizabeth Morris possesses a rare, crystalline voice reminiscent of Tracyanne Campbell of Camera Obscura, Harriet Wheeler of The Sundays and Wendy Morgan of the Popguns. I can think of no better introduction to the music than to introduce you to the sweet, jangly deliciousness of "Capricornia", which I consider one of the best pop songs of the year so far.


Europe delivers a collection of upbeat melodies, wistful and literate songs and excellent musicianship and vocals. This is at the top of the twee side of indie pop. So if -- like me -- you relish that sound, this album should be on your list.

Allo Darlin originally was the solo project of native Australian Elizabeth Morris, who moved to London in 2005. Additional members were added in 2009 and 2010, bringing the project to its current lineup of Morris (songwriting, vocals, uke and guitar), Paul Rains (guitars, lapsteel, vocals), Bill Botting (bass and vocals), and Mikey Collins (drums and vocals). The band's debut album was deservedly well received, but everything about this album -- including the songwriting and performances -- is a step up.

"Tallulah" is a track on which Morris goes back to her roots--just a girl and her uke:

Allo Darlin' - Tallulah from Will Botting on Vimeo.

Europe was released this week by Slumberland Records in the US and Fortuna Pop in UK/Europe.