REVIEW: The Just Joans - Buckfast Bottles in the Rain 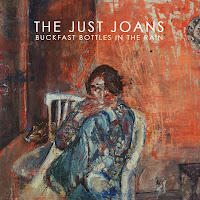 The delightfully named Buckfast Bottles in the Rain by The Just Joans is a concept album. Thematically, the album is about a teenage boy living in a small town and dreaming of a more exciting life, and follows him through his college years to the point where he realizes some of the charms of his earlier life. Musically, the album is a pop album that straddles folk, indie pop and even music hall, all delivered with a thick Scottish accent. Here is one of my favorite tracks, "Five Beer Bottles":


The band is from Motherwell, UK (Scotland) and is named after a column in a Scottish newspaper. There currently are five members -- David, Katie, Chris, Allan, Doog, and Fraser -- although many of the songs were crafted more than five years ago when the band was just David and Chris.


The 11 tracks on Buckfast Bottles in the Rain tell classic coming of age stories with the author's own idiosyncratic twist laid out on a beautiful musical tapestry. This is a very nice album to spend some time with, perhaps with up to five bottles of beer. It is released today by weePOP! Records.

For our US readers, Buckfast is a sweet, fortified wine with a high alcohol and caffeine content. Its reputation in Scotland is similar to that of Thunderbird or MD 20/20 in the states, and is thought by many to be the choice of drink for underage drinkers and those prone to anti-social behavior.