REVIEW: Leigh Marble - Where The Knives Meet Between The Rows 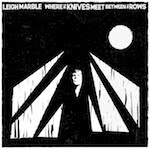 Leigh Marble is a Portland-based singer/songwriter who will release on April 24 his third album Where The Knives Meet Between The Rows, an intimate, very emotional collection of songs written through a very challenging period of Marble's life. On songs like "Walk" and "Holden", the emotion is right on the surface, and on songs like the gentle, dirge-like "Evil" and the longer "Nail", the emotion informs the entire track.

Click here for a download of "Walk" the opening track - a slow building, country-tinged track that revives, for me, memories of the great Joe Ely... another sharp observer of the human condition and the triumphs and tragedies that make up a life.

"Jackrabbit" (download available here) is a masterpiece, a full-bodied country rock ode to hangers-on, or as Marble introduces the song "strippers and politicians". Your choice, I suppose. The song starts in a bit of a minimalist vein, like "Walk" with a quicker tempo, but in the chorus it really gets going as Marble sings over the top of a rollicking drumbeat, keyboards and guitars in full roar:

"Who's bought out shares of your loyalty
Let's follow the dollar and see
Who's waiting in the wings to collect
As their demands get more direct?"

Here's a video of a recent performance of "Pony":

Well-written and extremely well-played, this album is out April 24 on Laughing Stock Records. On this record he has help from Erin McKeown, and local Portland musicians Jesse Emerson (Amelia, The Decemberists), Matt Harmon & Kali Giaritta (of The Ascetic Junkies), and Rachel Taylor-Brown.