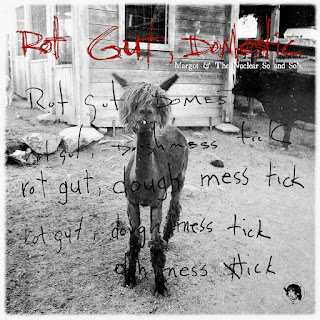 Rot Gut, Domestic is Margot and the Nuclear So-And-So's third album. Their leader is singer/songwriter Richard Edwards, and this record is a set of songs that he labels "panic rock". We recently featured an advance single, "Prozac Rock" and I remarked on the punk content. That's certainly in evidence on the rest of the record, but so is a real sense of musical variety. The rock songs rage on, and the ballads are sweet and affecting. There's a real sense of humor - if you find an artist with this kind of musical talent and a sharp sense of humor as well, hold onto him. From the ballad "A Journalist Falls In Love," a sad tale told from the perspective of a reporter who falls in love with a death row inmate only to have to witness his execution, this is the story of his opening line, as it were:

"Yeah, I know I killed a few
But none of those women were you"

And there's a really good rock song featuring the chorus "Arvidas Sabonis/ Come back, we miss you" - I mean, really good.

Edwards' voice is strong enough to carry real buzzsaw rock songs like "Shannon" and "Disease, Tobacco Free" but clear enough to carry the ballads here. In addition to the aforementioned "Journalist" the band also slows down for "Frank Left" which reminds me of a Paul Westerberg ballad, and the really beautiful album closer "Christ".

Here's a free download of "Shannon" via Soundcloud, where you can also stream a couple other songs, "Frank Left" and "Prozac Rock":

And here's a video for "Prozac Rock":

This is an excellent rock album with a big sound - it's ambitious, and there's nothing better than hearing a talented artist aim high and hit the target. They'll be on tour all over the country starting March 31. The album will be out March 20.