New Rock/Soul Discovery: Lee Bains III & The Glory Fires - There Is A Bomb In Gilead 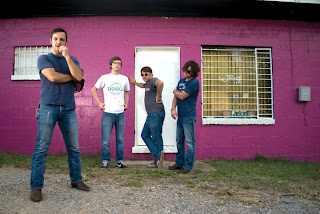 Do yourself a favor and download this song NOW:

Lee Bains III is a former member of the Dexateens, a longtime favorite of several on the WYMA staff. I'd have bought this record unheard, given the involvement of garage rock god Jim Diamond, but I have heard it and let me tell you, you will be quite upset if you pass on a chance to see them and to buy this in May when it comes out. "Centreville" is a good representation of their sound - Skynyrd meets The Dirtbombs in Memphis - and the song "Everything You Took" from the Alive Naturalsound compilation Where Is Parker Griggs? (WYMA review here) is as down, sweet and soulful as anything this side of Al Green. I'm not lying and I'm not exaggerating -- Bains is an amazing talent. Soul music this good just has to be heard. Spread the word.

A spectacular Allmans guitar intro and, again, that soulful voice fronting a screaming Southern rock band - what's not to like?

They'll be on tour with the Alabama Shakes (we've written about them before here, having first heard about them via the Drive-by Truckers) in March and April:

Wow! You sure they are not from Detroit? They are that good! Great find, boss.