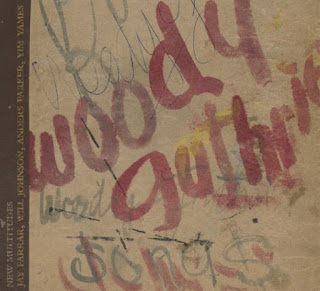 Time for the other half of the long-lamented but incredibly fecund Uncle Tupelo diaspora to have its go at the Woody Guthrie catalog. Where Jeff Tweedy and Wilco chose to team up with British busker/troubador Billy Bragg on the excellent Mermaid Avenue records, Jay Farrar grabbed three kindred American spirits: Anders Parker (Varnaline), Will Johnson (Centro-matic and South San Gabriel) and Jim James (My Morning Jacket), and they've made a similarly excellent record that reflects the expansiveness and, in a very real way, the loneliness of Guthrie's American journey.

And here's Yim Yames with "Talking Empty Bed Blues" - he also sings "My Revolutionary Mind" in which Woody is found longing for a "good leftist woman":

Johnson's songs kind of split the difference between the sweet and sad South San Gabriel ("Chorine My Sheba Queen" and "No Fear") and the guitar-slinging, feedback-drenched work of Centro-matic ("VD City", a raging, tragic song on which Johnson's excellent vocal puts a suitably forlorn touch).

And Farrar, well - let's just say if you buy this record because you like Son Volt and Farrar's other work, you won't be disappointed. He's one of those artists who never sounds much different... and for good reason.

I'd have to believe that these four artists, having built their music careers the way they have - writing their own music, seeing the country through a windshield as they built a base of support, and having fans identify very strongly with the sound and sentiment of their music - found it very easy to inhabit the persona of Woody Guthrie... and to write great music behind the lyrics. This is a really good record, and I feel fortunate - four of the best singer/songwriters working today, for the price of one record.

Buy at the Undertow Music site - check out some Centro-matic while you're there.
Posted by John Hyland at 3/07/2012