Great New Songs! Future of the Left / High On Fire / PS I Love You 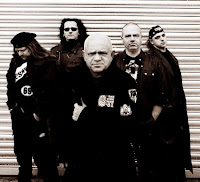 Man, what a week for tantalizing music announcements! I had to have seen ten things that made me go 'hells yeah' for one reason or another, but I've forgotten all but three of them, and before I forget those, I figured I'd better throw them up here.

Just so you know, we aspire to be more than merely an aggregator blog. We want to be what they call in managementspeak a "value add." This can be through incisive music analysis, or by throwing in a trenchant quote from Antonio Gramsci or Shirley Hemphill, or even a half-witty remark here or there. 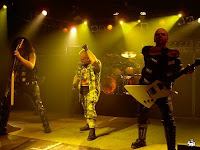 I got none of that for you today, but in an attempt to justify my station among the rarefied echelon of music people above me on the blog masthead I have interspersed this post with pictures of Udo Dirkschneider. Udo is nearly as famous for his stature as he is for his leviathan vocal prowess. In the photo above, he is standing ten feet in front of the rest of his band. Below, he is whipping the crowd into a frenzy at a recent show at Madison Square Garden, or Hammersmith Odeon, or someplace.

I have written or said before, maybe even here, that Mclusky is one of my all-time favorite bands, and that Future of the Left is one of my favorite current bands. Andy Falkous is an artistic treasure in the tradition of Swift, or Wilde. When I try to think of a more modern counterpart, it's hard to ignore the recently departed Christopher Hitchens for that Falkonian blend of wit, culture and spleen. After all, it was Hitchens who said of Francois Mitterand, "One cannot eat enough, to vomit enough, at the mention of his name." And of the then-recently departed Jerry Falwell, "If he had been given an enema, he could have been buried in a matchbox." Falco, for his part, said Gareth Brown's mom is a ballpoint pen thief.

Here's Udo squeezing out a song with his current band, U.D.O.

Falkous's post-Mclusky project Future of the Left replaced its bassist and added a guitar after touring their excellent second LP, Travels With Myself and Another. Last year they released a very nice EP and now have announced that the next full length, The Plot Against Common Sense, will be released on 28 May through Xtra Mile Recordings. This week they posted the first video from the album, "Sheena is a T-shirt Salesman", over on NME. Check it out HERE.

Udo sometimes moonlights as a security guard. He doesn't need the money, he just likes authority.

High on Fire put out one of my favorite albums of 2010, and this week announced the follow-up, De Vermis Mysteriis, will be released on 3 April by eOne Music. Start saving your semoleons because that's less than 5 weeks. They also posted a bonecrunching song, "Fertile Green", over on Pitchfork. I might be able to embed it here, but there's a nice short writeup by Brandon Stosuy over there, and he's always good to read.

Seriously, the also-recently-departed Ronnie James Dio, at 5'4", towered over Udo. And yet comparing the two as vocalists, Ronnie James is the dwarfish one, and Udo is the titan. And I deeply love Ronnie James -- did you ever listen to Mob Rules (the album, not the band)? Hoo boy. 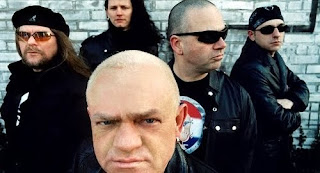 PS I Love You was a fantastically bad romantic comedy from 2007 starring Hillary Swank, and a fresh-off-300 Gerard Butler (what the hell were you thinking man?). Believe it or not, the film also had Lisa Kudrow, and was stillbad. This movie was so bad that one critic called it "more uneven than an emery board," and you know that critic had been saving that chestnut of a simile for the right moment for years.

Despite his Teutonic origins, Udo is not afraid to show the pensive, slightly crosseyed side of his personality. 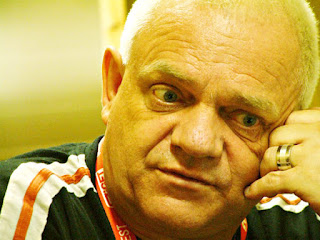 It is only in that context that one's reaction to the band naming ability of Benjamin Nelson and Paul Saulnier, of Kingston, Ontario's PS I Love You, goes from, "what a stupid band name" to "what a freaking great band name!" Kingston may be famous for being the home of Carolina Hurricanes coach Kirk Muller andCarolina Hurricanes defenseman Bryan Allen, but it should be nearly equally proud of the awesome amount of beautiful noise this young duo have cranked out over the past couple of years. John posted a great song off their excellent 2010 album Meet Me at the Muster Station last January. A couple of days ago they posted a new song over on Pitchfork called "Sentimental Dishes", which will be on their new full-length, Death Dreams, out 8 May on Paper Bag Records. It's a fantastic song, and well worth the parsec it would take to get over to Pitchfork, if in fact parsec were a unit of time rather than of distance.

When Udo saw this photo, he yelled, "anatomisch korrekte!" and then headbutted his publicist in the sternum. 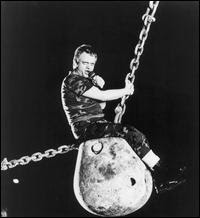