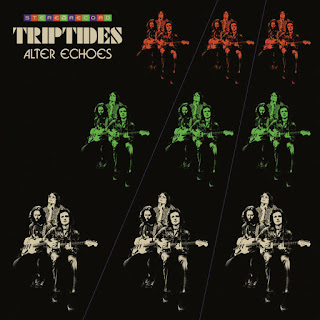 Here at When You Motor Away, what do you think are the odds we would enjoy a band playing psychedelic guitar pop and singing in a fake British accent? You guessed right, and you win an introduction to the latest excellent album by LA’s Triptides. Their music is richly reminiscent of past psych avatars like The Byrds, The Zombies and even Syd-era Pink Floyd in places. Here is "It Won't Hurt You", which I think has echoes of all three - but man, the drums really kick it up a notch:

The consistency of their approach is absolutely a virtue; a band this good at putting together 12-string guitar, straight-ahead rhythms and hazy vocals ought to feel perfectly fulfilled giving us more of that, and I'm glad they do. Here is "Do You Ever Wonder?", which eases into its first verse on a lighter-than-air electric line, adds a strummed acoustic and proceeds to fill up your ears with an overwhelming array of sweet psychedelic sounds - watery vocals, more and more guitars, layered on and mixed in with the vocals and rhythm section, then cut back to reveal that opening riff again, a couple of vocal sighs, and then, at 1:45 - a guitar solo that is somehow soaring and understated at the same time. It's really a beautiful piece of music:
Can they slow it down? Oh, yes. The ballad "She Doesn't Want to Know" is as easygoing as a summer breeze, and taken out over a clear, light guitar solo:
This resets the proceedings for what might be my favorite track here, "Now And Then", what sounds like a 21st century reworking of Cream's "I Feel Free" - reimagined, of course, as the base for a bunch of Sunset Strip jangle and fading out over ethereal vocal harmonies, a full array of guitars, and a sort of go-go backbeat:
There is so much going on here, it's sort of hard to believe this is a trio, but the band consists of Glenn Brigman, Brendan Peleo-Lazar and Stephen Burns. The record is available from our old friends at Alive Naturalsound records.
Triptides at Alive Naturalsound Records
Posted by John Hyland at 4/15/2021