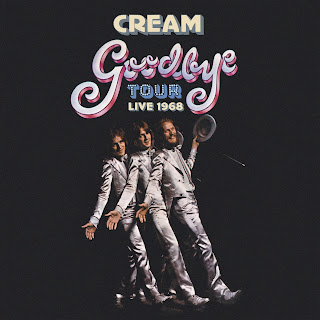 Out now on UMe/Polydor is a reissue of the full Cream concert at the Forum from 1968, featuring a heartwarming intro by Buddy Miles and full, well-mastered versions of 9 songs over 4 sides of vinyl that will convince you (or reinforce, if you already were convinced) that Cream live was probably as good as blues-derived rock (which is to say, rock) ever got. The “Crossroads” on here, starting from a standstill and with Eric Clapton singing lead on a cover of his favorite blues artist, is masterful and by itself probably worth the cost of this package.

I remember having the original Goodbye and Wheels of Fire on, respectively, 8-track and scratchy vinyl hand-me-downs, and have to say that, if your experience is similar, you may want to revisit this music. You will be amazed. There are moments that reveal themselves more clearly here - Jack Bruce’s thundering bass runs on “Crossroads” and Ginger Baker’s crackling drum work on “White Room” among many - that compliment Bruce’s vocals and Eric Clapton’s legendary guitar work and will transport you. In addition to the blue vinyl rendition of the Forum concert, there is also a 4-CD box set containing four concerts from this same time period. I’m so glad this is out of the vault.