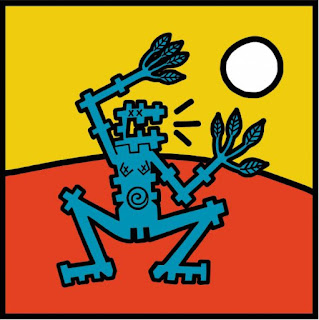 I think London DJ Raf Rundell has created a genuine treat for listeners with O.M. Days. Apparently the name of the album stands for 'Oh My Days', although I have had that confirmed by absolutely no one (Tucker is in the room with me, but Tucker is a dog and usually agrees with me). But whatever its intended meaning, around my house it means 'the party has started'. The album consists of ten tracks, the first six of which providing enough funk, disco, R&B and related styles to make us think we aren't housebound by a virus. Track 2, "Down", was so compelling that I got stuck on it and hit the replay button four times. The following "Monsterpiece" was the perfect disco palette cleanser. Next up is "Ample Change" featuring Lias Saoudi of Fat White Family, thrilling with propulsive tribal drumming accented by middle eastern/North African melodies. It is one of the more compelling tracks, but with a seven minute run time I will leave it to you to stream.  But we will deliver the following "Always Fly (ft. Terri Walker)" because we all want, even deserve, some slinky R&B on a Saturday night.
And then with track 7, "Miracle", the album turns more reflective although no less interesting. It is as if Papa Raf knows we need to wind down and relax before Sunday morning. Of those latter songs, we are most taken with "Butter Days (ft. Andy Jenkins)".
Raf Rundell is one half of group 2 Bears (with Hot Chip's Joe Goddard). O.M. Days is his second album, and is out now via Heavenly Recordings.