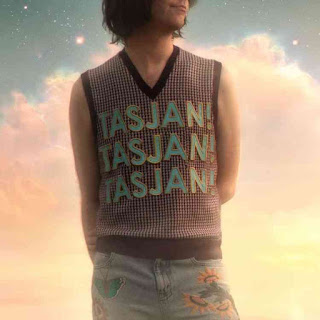 Aaron Lee Tasjan has really matured as an artist, and his latest Tasjan! Tasjan! Tasjan! is a terrific pop rock album, exploring strands of Americana, power pop, folk rock and some fairly baroque Britpop. He's also become a local Nashville hero, with his album cover portrait on the side of Grimey's, and he played a show a couple weeks ago to celebrate the release of the vinyl edition of this record.

I'm reminded of several of the Wilburys - I think the quality of the first four songs puts him in league with Petty in terms of the big chorus/guitar combos, and there are strains of ELO all over this record. Tasjan is a really good vocalist - his voice supports every one of these turns, and the record combines these elements well.

And here's "Up All Night" - I love the way he is not the least bit restrained from repeating a chorus over and over - good thing for an artist to know when he's struck gold:
The songs are all high quality, with plenty of variety to reward repeated listens. The album ends on a strong emotional note with soaring vocal harmonies and acoustic-based melodies of "Not That Bad" and "Got What I Wanted", which seem to be a denouement, based on the album's themes of self-discovery and self-care. Very well done. I realize this has been out a while, but the vinyl just came out a couple weeks ago, and I really like it, so here you go.
Aaron Lee Tasjan website
Aaron Lee at New West Records
Posted by John Hyland at 4/08/2021