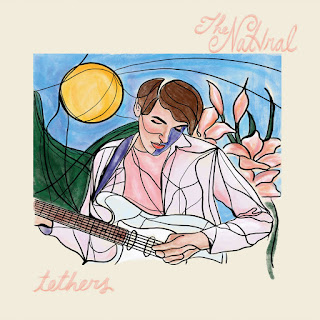 If you were a fan of The Pains of Being Pure at Heart, as I certainly was, and you expect Kip Berman's solo work as Natvral to be more of the same, you need to adjust your expectations. Things change: Kip's life changed; my life changed; and I hope to God that your life changed as well. In Kip's case, he now is married, twice a father, and living in Princeton, New Jersey instead of New York City. So Kip's songwriting gaze is on his new life, sprinkled with some heartfelt tugs at the pull of his old life. On Tethers, his debut album as Natvral, it is honest songwriting, and as we would expect from Kip, excellent songwriting. The style of the songs is different than POBPAH as well. Gone is the fuzzy wall of guitar, replaced by a folky, roots rock approach. I suits Kips voice, and it works well as a vehicle for the material. The song have an immediacy and a rawness. Not a rawness owing to lack of completion, we think, but a rawness due to a deliberate choice to not polish away the instinctive emotions flowing through the song. We think this is a special album and will be in a cherished spot in our rotation for a long time.

For Tethers, Berman enjoyed the contributions of Brian Alvarez (drums), Sarah Chihaya (backing vocals) and Kyle Forester of Crystal Stilts/Woods (organ). The album is out now via Kanine Records.