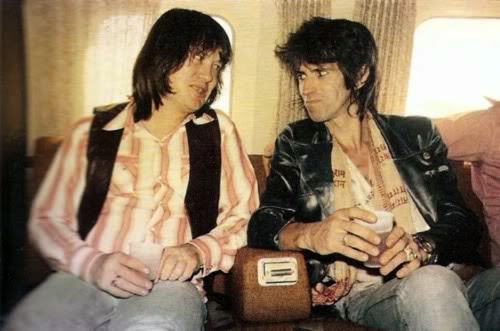 Bobby Keys died this week at age 70. Certainly one of if not the greatest sax player in rock and roll history, Keys' saxophone brought a tough and dangerous edge to the Stones' sound. His blistering one take, 30 second solo in the middle of "Brown Sugar" only added to the song's raw sexuality and is etched in every rock and roll fan's brain:


We covered one of Keys' signature moments "Can't You Hear Me Knockin'" with its amazing extended saxophone jam by Bobby Keys on Rolling Stones Friday earlier here at WYMA.

Keys was a native Texan, once ran a nightclub in Florida owned by Ron Wood, and was most recently living outside Nashville when he died. While best known for his work with the Stones, with whom he both recorded and frequently played on tour, Keys also over the years recorded with all four members of the Beatles after their breakup (including John Lennon's "Whatever Gets You Through the Night", you remember that sax line), The Who, B.B. King, Lynyrd Skynyrd, Eric Clapton, many many others including in 1961 when Keys was just a kid with Dion and the Belmonts on "The Wanderer", and this absolutely amazing live version of "The Letter" with Joe Cocker and his Mad Dogs and Englishmen in 1970:


We will certainly miss Bobby Keys. We'll leave you with a live version of "Miss You" from 1994, with Mr. Keys absolutely tearing it up:

Big loss for rock and roll and the world's greatest rock'n'roll band.
Posted by Jim Desmond at 12/05/2014