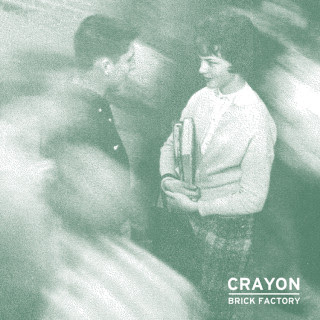 Hey pop collectors.  Here is a rare and wonderful album from the first half of the '90s.  The Pacific Northwest, was banging its collective head to grunge and other forms of alternative rock.  The Southeast had R.E.M, The dBs and its own brand of swampy jangle.  But amid it all, there was a spot for a noisy, lo-fi, merger of twee, punk and noise pop.  Born in the college and lumber town of Bellingham, Washington, there was Crayon.  Consisting of Brad Roberts (guitar/vocals), Sean Tollefson (bass/vocals) and Jeff Fell (drums), the band recorded a few singles and one album, Brick Factory, released in 1994 on Harriet Records.  By the middle of the decade, they had disbanded, with Tollefson and Fell leaving to found Tullycraft.  As the release of Brick Factory hits its 20th anniversary, HHBTM Records has issued a limited edition vinyl version of the album, which comes with a digital download with including 20 bonus tracks.  There is a cassette version with some bonus material as well.

The songs on Brick Factory deftly capture the awkwardness of young adulthood, the delight in the commonplace, the trickiness of romance, and wrapping it in distorted guitar, coy lyrics and bratty vocals.  The performances are energetic, and the music begs to be played at a high volume.  The record has been out of print and much sought after for years, so its resurrection is bound to delight old and new fans.  It may never come around again.