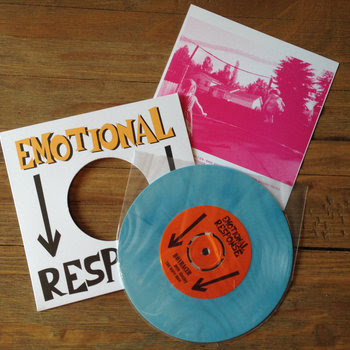 Punk popping Boyracer has had a long career in the creases of the indie world.  Their work has been released by Slumberland, Sarah, Jigsaw, HHBTM and others, and the band has released over 800 songs sing 1991.  Apparently, that golden pension plan available to all indie rockers have vested, because the Pete Shelly EP is said to be their final release.  While I find that news sad, at least they are going out on a high note.  To be more exact, many high notes, many low notes, some percussion, some snarl, and all of it as loud as you like it.  None of us would have it any other way.

For the Pete Shelly EP, Chief Boyracer Stewart Anderson is joined by his spouse Jen Turrell and guitarist Matt Green.  The title track starts off proceedings with a song that is as close to an anthem as you likely will get with crash pop.  Replay it a few times - you deserve it.  "2nd Wave Mod" is a footstomper with sneering vocals, pounding drums and sawing guitars.  "The Kind of Man You Really Are" features a snaky groove.  Jen takes the lead vocals for the more indie pop, and very tasty, "Jump".  Play it loud, and play it proud.  Farewells don't have to be sad.

The record is released by Emotional Response Records, which is a label run by Stewart Anderson and Jen Turrell, who together previously ran the labels 555 Records and Red Square.  You can buy the vinyl or the digital download, and either one gets you two digital bonus tracks.  You can order via Bandcamp, but Stew and Jen advise ordering though their website at the bottom of the post, as it will be less expensive.