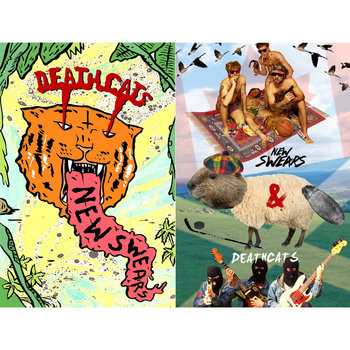 One of our favorite discoveries of recent years is Glasgow's Deathcats.  That doesn't make their recent announcement of their upcoming hiatus any easier to take, but we can take cheer in their pre-break release for Fuzzkill Records.  And this one is extra special because Deathcats' four lo-fi, fuzzy garage punk songs are combined with four rock nuggets from Canada's exciting New Swears.  The release is available as a digital download or a cassette plus digital download.

The record finds Deathcats in prime Deathcats mode - loud, swaggering, and proudly displaying a few rough edges, but with solid pop smarts under the fuzz and bashing.  For my money, "You" is the best track (narrowly edging out "End Game"), and you can enjoy the band playing the song in the video below.  One listen to "Satan Loves You", the first track from New Swears demonstrates that they are an apt pairing for the noisy Scots.  Upbeat, garage pop with sing-along choruses.  Both these band approach music as a good time, and make music that is perfect soundtrack for good times.  Is there a better reason to grab the record?  I think not -- stream it below and hear for yourself.