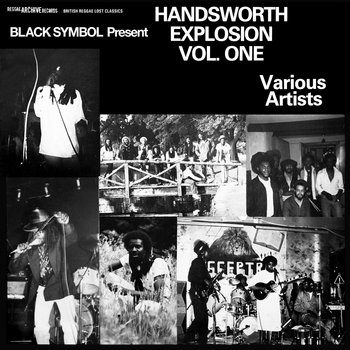 Bristol, UK's Reggae Archive  Records, and its sister label Sugar Shack Records are committed to resurrecting great British reggae recordings of the past, as well as supporting current reggae artists.  And as we've written before, it would be an error to dismiss this material because it isn't from Jamaica.  Jamaican immigrants to the UK spawned a thriving reggae scene, and many Jamaican reggae artists performed and resided in the UK.  And the crucible of minority status and the cross pollination with rock and roll resulted in tough, tight rhythms and hard-hitting messages.

Today's featured release is Black Symbol Presents Handsworth Reggae Explosion Vol 1.  Consisting of two contributions each from five artists -- Sceptre, Black Symbol, Truth & Rights, Gerald Love, and Zephaniah -- this reissue of a rare UK classic record originally was released  only in vinyl format by Reggae Archive Records.  A second volume was released for UK's record store day, also in vinyl.  The label is preparing to release a CD containing both volumes, but also is making volume 1 available as a digital download as well as vinyl.  For reggae collectors, this is a 'must have', but anyone who appreciates the pulsing bass, dub effects and chanting vocals of roots reggae will find this a compelling listen.