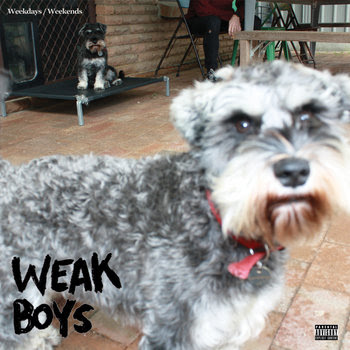 This post about Sydney's Weak Boys combines two of my passions: Finding emerging artists to bring to your attention and losing myself in good guitar pop.  Since I'm at the office I can't add my passion for drinking beer while listening to and writing about good guitar pop, but that will be remedied in a few hours.  I'll admit that I have no idea whether the three Weak Boys are physically deficient, but their musical abilities as on display on Weekdays/Weekends strongly hit my sweet spot.  The songs are charming, shaggy (generally, and in the case of "Dog Farm" and the cover art, literally), and unapologetically  focused on youthful issues such as hangovers, landlords, soon-to-be-broken vows to 'never drink again', and tributes to desirable women (specifically Diane Keaton and Julia Wilson of Australian label Rice Is Nice).  The self-aware and observational approach reveals a musical kinship with other Australian bands such as Dick Diver, Twerps and The Ocean Party.  But Weak Boys put their own spin on it with an approach that suggests a bit more substance ingestion and an unserious perspective on matters large and small.  A number of the tracks have an infectious sing-along appeal that would work to great effect in your local pub, or around a bonfire.  They probably would be especially awesome around a bonfire in your local pub, but don't attribute that suggestion to us as our liability reserve was exhausted after a python-go-seek contest suggestion we made last year (and a shout out to Rodney, the contest winner, who we've learned is eating solid food again).

In my opinion, you are unlikely to find a guitar band that penned a more infectious set of songs this year.  Consider that the ten tracks will likely include your favorite songs about hangovers and dogs, and most certainly the best song you'll hear about Diane Keaton.  And to think that a few minutes ago you probably didn't know there was a song about Diane Keaton.  I'll be including this album on my end of the year list, give it a listen.

Weak Boys are Chris Yates, Craig Lyons and Matt Banham.  Weekdays/Weekends is available now via Strong Look Records.  You can source a digital copy at the Bandcamp link below.

This is a great record....I'm digging it.