Rolling Stones Friday (finale): (I Can't Get No) Satisfaction 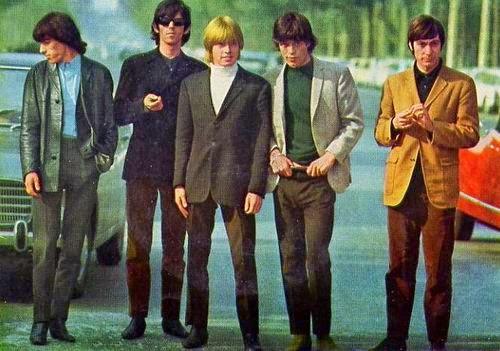 We've saved the best for our last week here at Rolling Stones Friday.

I'll never forget the first time I heard "(I Can't Get No) Satisfaction".  I was 8 years old and at a large family gathering at my grandparents' house, amidst my Italian-American aunts, uncles and cousins packing the small house. My cousin Raymond, the coolest guy I knew (then and still today!) called me into the dining room where he had a small radio. "You heard this new song by the Rolling Stones? Well you need to. Put away that "I Wanna Hold Your Hand" stuff, this is rock and roll." Raymond was only 11 or 12 at the time but he knew how important this was.

It was the summer of 1965, and the radio was dominated by some great pop singles like The Beatles' "I Feel Fine", The Beach Boys' "Help Me Rhonda", Petula Clark's "Downtown" and "My Girl" by the Temptations. The British Invasion was in full swing with lightweight bands having hits like Herman's Hermits' "Mrs. Brown You've Got a Lovely Daughter" and Freddie and the Dreamers "I'm Telling You Know".

The Rolling Stones had gone into RCA Studios in Los Angeles for one day on May 12, 1965 and come out with a new single, one of their first original compositions, "(I Can't Get No) Satisfaction". The single was rushed into release less than a month later on June 6.

To this day, it snarls and sounds threatening and downright nasty. Keith Richard's guitar riff is one of the most distinctive and memorable in rock history. There's no point in debating whether it is the single greatest rock and roll song of all time, but it's on anybody's short list, certainly up there with whatever classic song you name - "Like a Rolling Stone", "Hey Jude", "London Calling", "Smells Like Teen Spirit", "Jailhouse Rock", "Papa's Got a Brand New Bag".

The expression of frustration is a core element of a great deal of rock'n'roll. But seldom is it captured as succinctly as here - the girls who didn't want him, the barrage of marketing coming at him, the oppression from all sides. And the generational divide is captured in the bad grammar of the chorus: "I can't get no!"

The song is a sort of stake in the ground in 1965, a precursor of a youth revolution that would metastasize a couple years later around sexual freedom and a full-throttled rejection of the Western military-industrial complex. All this youthful frustration captured in perhaps the most famous guitar riff in history and the increasingly urgent delivery of the simple line: "I can't get no satisfaction!"

A lip synched television version from 1965:

A remarkably good live proto-punk version from a 1965 concert:


A big and current version from the 2013 Glastonbury festival, with Mick Taylor, a horn section and more, proving that even nearly 40 years later the song still has power and relevance:


Thanks for reading this feature this year. And a special shout out to Frank Fahey who supported this enthusiastically, posted Rolling Stones Friday at his Facebook page every week, and suggested songs I might highlight.