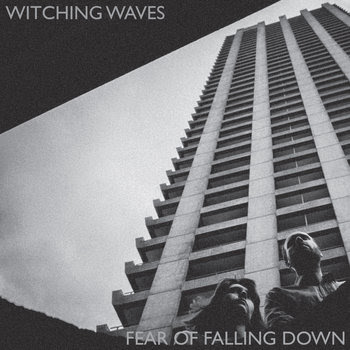 London's Witching Waves are a serious lot.  In the last couple of years they have toured the UK three times and released three cassettes.  They've honed their sound, and added a bassist to the founding duo.  Their approach is DIY, but when one of your members is a professional sound engineer, you start out ahead of the class.  And all that culminates with their debut album, Fear of Falling Down, on Soft Power Records, and it is time for evaluation of the band's progress.

From this corner, they get a high grade.  The album consists of taut, angular indie rock with relentless, driving rhythms, and sharp, hard drum hits.  The vocals often sound defiant, although the lyrics tend to fall in the romantic vein.  Seasoning is provided via dashes of aggression and anxiety in some tracks, and jangling noise pop in others.  Although the '60s garage rock ancestry is apparent, I think this is garage rock deliberately re-imagined as post punk, with arrangements crafted to allow for changes in textures and dynamics and urgency blunted by intrusions of space and male/female sing along choruses.  The artful welding of these elements into a sturdy, pop-oriented rock album suggests good things for the future of Witching Waves, but more importantly it makes Fear of Falling Down a debut to which indie rock fans should pay attention.

Fear of Falling Down is out now on limited edition vinyl and via digital download from Soft Power Records.  Hit the Bandcamp link to stream or buy the album.