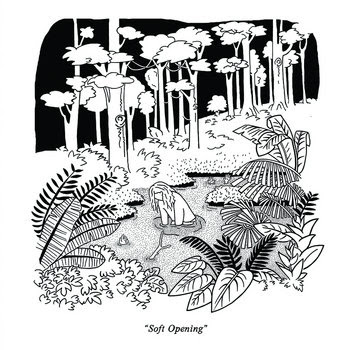 This is a bit embarrassing.  A friend recently asked my if I'd covered Soft Opening, the debut LP from Seattle's Posse because they are a local band and it is the sort of music I like.  I was fairly sure that I hadn't reviewed the album, but the name of the band was familiar.  So I searched the draft folders for the blog (informally referred to as the 'lazy man's wall of shame'), and discovered that I'd created a stub post for the review last spring.  Apparently, I then got busy doing other things great and small, and wrote no more about the album.  Usually, such a post sits on a wall of shame until the responsible lazy man deletes it or, if really lazy, lets it sit in draft state for years.  But I really can't do that to Posse, because Soft Opening is a fine album and you deserve reading about it and the band deserves you reading about it.

This is guitar-dominated music, which is to be expected from a three-piece consisting of two guitarists and a drummer.  The guitars are ring and jangle, with a clean sound that most recalls Real Estate, or several current Melbourne bands such as Dick Diver and The Ocean Party.  But as the album unspools you'll discover that the arrangements aren't all derived from the same template.  Depending on your preferences and listening history, you may here a bit of Pavement here, a bit of Jonathan Richman, Yo La Tengo or the Pixies there.  The guitars seem to be having a bit of a friendly discussion with each other, which reminds me of Robert Scott and Kaye Woodward of The Bats.  For that matter the vocals are straightforward and conversational as well.  It is music delivered with no drama, and little in the way of hard edges.  But the melodic textures are richly layered with plenty of shimmer and some appealing quirky diversions.

The breathtaking opener, "Interesting Thing No. 2", in which Posse does about every thing they do well in just one song, was an obvious track to pick for your evaluation.  The relaxed, sublime, shimmering slacker pop of "Shut Up" -- yes, all six and a half minutes -- is another.  In determining whether I recommend an album I typically don't pay any attention to what other people say about it.  However, because I wanted to include a third song, I wandered the internet tubes to determine whether there was an additional consensus favorite.  What I discovered is that among people that loved the album and noted a favorite, the choices included nearly every song.  That suggested two things to me.  First, it confirmed that this album is full of good songs that connect with listeners.  Second, I get to choose the song I want.

I have spilled a magnum of digital ink over the past two years championing guitar pop music as played by many bands from Australia and New Zealand, only to find that one of the best albums in that vein this year was recorded by a band in my back yard.  I could feel a bit like Dorthy being told by the good witch in Oz that what I was looking for was in front of me the whole time, but that would require introspection.  So never mind all that, just get yourself a Soft Opening.


Posse is Sacha Maxim (guitar/vocals), Paul Witmann-Todd (guitar/vocals) and Jon Salzman (drums).  The album is released via the band's own Beating A Dead Horse Records, but the easiest way for most people to buy it would be to hit the Bandcamp link below.  There was a vinyl edition, but all copies have been sold.