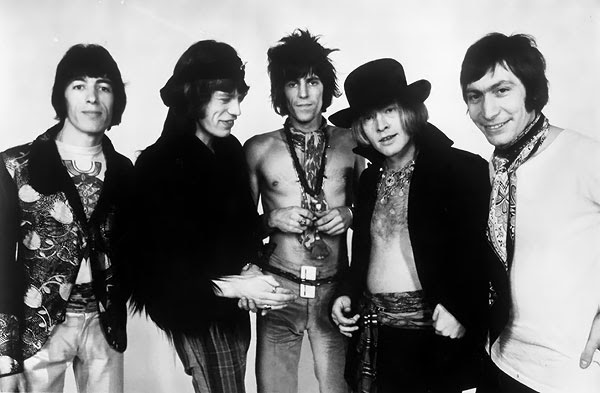 The year is coming to a close and we're riding our Rolling Stones Friday feature to the finish line with an extra kick.

"Jumpin' Jack Flash" released on June 1, 1968, brought the Stones back to their blues-rock roots following the psychedelic influenced material of 1966-67. Though Mick Jagger has said the song was an even more literal retreat from that era as it arouse "out of all the acid of Satanic Majesties. It's about having a hard time and getting out. Just a metaphor for getting out of all the acid things."

It was recorded in London in April 1968. Keith Richards says the open tunings used on the acoustic guitars were inspired by the "Nashville tunings" that a member of George Jones' band had taught him.  Microphones were placed directly inside the acoustic guitars to get the loudest, most direct sound possible. Brian Jones played the electric guitar parts. Bill Wyman claimed in his autobiography that he wrote the song's distinctive guitar riff but wasn't credited.

And, regardless of author, what a memorable guitar riff it is:


Here's a terrific live version from a couple years later with Mick Taylor on electric guitar:

"Jumpin' Jack Flash" is clearly one of the very best songs in the Stones' esteemed catalogue.  I've heard it thousands of times yet it still sounds fresh and urgent.
Posted by Jim Desmond at 12/19/2014