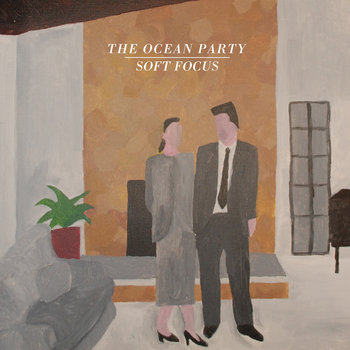 This is one of my favorite albums of the year.  It is music I like, but it also is music that I need from time to time.  When I need to feel content, relaxed and centered, Soft Focus takes me there.  And it does the job not because it is all sunshine and unicorns, but because it is a highly evocative record.  It captures you and takes you to a place or situation.  That could be driving down the highway, sneaking around a neighborhood at night, wondering about career choices and expectations of others, trying to work out a relationship while wondering whether you really should work out the relationship, or gaining contentment even when some things are unsettling.  But the situation need not even be one described by the songwriter.  A few chords and phrases, and the listener might paint his or her own scene at the beach or in the park.  If you dive into The Ocean Party's world, you'll find a healthy dose a of self-deprecation in the lyrics, but without too much stress and anxiety.  However, I think the real magic at play here is how the five members of the band, all of whom have written songs for the album, have taken the initial concept and lyrics, and then painted a rich and layered musical landscape.  Not solely a guitar band for this outing, their jangling aesthetic is supplemented with clarinets, saxes, horns, harmonica and synths.  In many spots the music shimmers warmly, the emotions expressed in hazy thoughts and pastel colors, underscoring the apt name given to the record.  The various instrumental touches are employed with restraint, and always add rather than distract.

Inevitably, the album will draw comparisons to fellow Aussie bands The Triffids and The Go-Betweens, as well as Real Estate, and there is an undeniable honor in such references.  But Soft Focus in not an homage to anyone.  It is too multi-dimensional, too bright and firmly in the moment.  To me, it is the sound of a young band that has take a major step in growing up and mastering their art.

The Ocean Party are Jordan Thompson, Liam Halliwell, Curtis Wakeling, Lachlan Denton and Zac Denton.  Soft Focus is available now from Jigsaw Records in the US, and Spunk Records in Australia.  You can stream the entire album at the Bandcamp link below.